Overheard at Table 3: Professor Marston and the Wonder Women (2017)

All through the movie, I'm humming, "I don't really see why we can't go on as three."

Yes this is about polyamory or a menage a trois or whatever term you would like to place on it, and yes it is about female empowerment as well as male fantasy and yes it is well acted although a little wooden in parts ... but all in all it did indeed seem as though the wonder women were two halves of a whole: the brains and the beauty.

And for that it really fell into the old trap: the idea that a woman is either one or the other.

Some of the best scenes were actually when Marston and Connie Britton, playing Josette Frank, a consultant for the Child Study Association of America, as she interviews Marston to get him to admit that Wonder Woman is fetish S&M fantasy for perverts.   You can almost see her sexually aroused by their repartee... the dialogue between the two of them would actually make a wonderful two-person play. 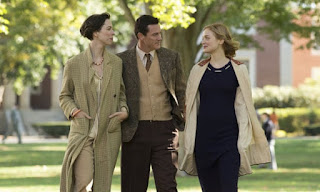 Props to the film for showing the eroticism and never venturing into pornographic descriptions, as the main focus is on the romance among the triad, and not the actual sex.  Also, props to the film for including that the two Wonder Women stayed together for decades after Marston's death ... still though, a more insightful film possibly should have started at the end of their lives, reminiscing on their last decades together, with Marston as their starting point, rather than being this ever-present center that bound them together.  As it stands, it seems that they spent more of their lives without him than with him, and the ability to hold on to THAT relationship, throughout THOSE decades, that seems to be where the true romance lies.

Ah, though!  'Tis easy to sit here and pick apart the work of people who spent years on this movie, but I'd say the same thing if I were caught in a golden lasso.