Arman: Are we REALLY having this discussion about anchor babies?   Heard on the radio the other day this lady was really going on about how "illegals" come here to have babies so they can get social services.   And what really made this different is that she didn't sound like a freaking wingnut.  She was making a rational argument.

Juli: A lot of people are making that argument.  They're all nucking futs.

Arman: But when you've got a rational one, that's even more dangerous.   For me I just wanted to call up that radio station and tell them, 'Listen you morons.  People fuck.  People fuck a LOT.  People are getting it on all the time.  And women from Latin countries are coming from countries where the men demand it constantly.  Hell, a quinceañera is just a celebration that a girl has reached her 15th birthday withOUT getting pregnant. THAT's how much they do it.   So LAY OFF the rhetoric.

Juli: Arman, women let themselves get pregnant for all kinds of reasons.  Usually women get pregnant just to keep their man around.  I think anybody talking about illegals wanting anchor babies also needs to talk about good old Americans - white, black, brown, whatever - who have babies just to try to keep their men from leaving them.

Arman: So we're all anchor babies, then?

Email ThisBlogThis!Share to TwitterShare to FacebookShare to Pinterest
Labels: 2015, Table 1

Overread at the Counter: The Day After Taking Our Daughter to College

The Day After Taking Our Daughter to College

We had taken our daughter to college,
driven in two cars, three and a half hours each way.

We unloaded the pillow pets and the yearbooks in our daughter’s room.
We drove to the nearest Wal-Mart to purchase a laptop.

We stopped for dinner - PF Changs - all three were crying.

On the drive back, around 11pm, still a half-hour from home,
Our daughter calls: she doesn’t know how to work the laptop.

This morning, at breakfast, we eat our beans and eggs.

Abuelita is crying, she says our daughter has nothing to eat.
We try to convince Abuelita that the cafeteria is included in the payment.

Like a good White Male, I avoid the situation
By going outside to get the ladder and the limb pruners.

I start to trim the tree whose branches have been overgrown for two months.

The limbs begin to fall around my face, around my arms.
In a thick elbow of one branch, there is a cluster of twigs: an abandoned nest.

All the little birds have flown.

Overheard at Table 3: News Stations at your local Credit Union

You just can't make everyone happy.  Case in point: when I was still going to school in College Station at my local credit union they had a tv screen playing, something just to lull your brain while waiting in line.  One day I went in and noticed the tv was turned off.  That was weird, so I just said to the teller, you know, making small talk, "weird, this is the first time I've seen the tv turned off."

Overread at Booth 2: After Market in the City of Melting Snow

After Market in the City of Melting Snow

At least once a week,
Walk into the city of melting snow;
Wet weaves through the bricks, cracked
Like melancholy/
A drain of tears,
Through which step the citizens, like
Shadows creep through
Well-worn memories.

There is a weak light
That gathers at dusk.
Shop windows close their tired eyes.
Cart wheels creak
Over the paving stones, their loads
Lighter now than at the early hours
Of the dawn:

So begins the trek
To the country side/
Full of night shadows and banshees.

Overheard at Table 2: Kids These Days

Sandra: You won't believe this, but Bryan just said his first words!

Bree: Omigawd you must be so excited!   Was it "mama"?

Sandra: I knOW!  Isn't it wonderful!   She knows WHAT she is!

Bree:  Kids these days, they are SOOO self-aware!

Sandra:  We're so excited, we're going to have gender reconstruction surgery next month, just before her first birthday.

Bree: That will be SUCH a party.

Sandra: Mike is such a kidder, though.  He says he knows a Moyel who'll do what he calls a "super-bris" ...

Bree:  Do you think you can name her Bree-anne?

John Steppenwolf: Heard last week that there's a new movie coming out about the Stonewall Riots.

Niall Carter: Explain that to someone who was a suckling babe at the time.

Niall Carter: Riots in New York?   How is that newsworthy?

Steppenwolf: Pretty pivotal point in the gay rights movement.   Paved the way for casting it in the light of civil rights instead of just lifestyle choice.

Lucky Moran: I heard that the movie already is getting protests.

Niall: Why?  Anti-gay and the churchies?

Lucky: Actually no.  A bunch of LGBT activists are totally POd because the main character is a white guy.   They say that it ignores the contribution of people of color and transgender. 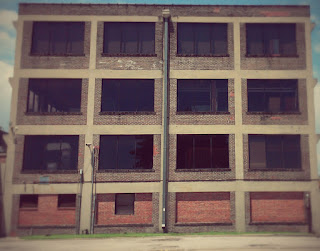 At one time this building actually housed offices that made something.  Nobody quite remembers what that something was, or who were in those offices.  Faded letters on the bricks on the side of the building say "Smith and Company" but that lends no clues to what sort of work might actually have gone on inside those walls.

In recent times it was a storehouse that shipped out large bulk supplies of building materials.  Now they have moved.   Nobody knows where.

Most likely a developer will soon buy the building.  They will either renovate it for luxury apartments, or tear it to the ground to build yet another dull row of condominium houses.

Writer 1: OK, so we've got the twins who've already transitioned into each other's gender.  What should we do to open Season Five?

Writer 2: Open it up with their wedding.

Writer 1: To each other?

Writer 1: But they're still only 14.   I don't think you can marry that young even in Vegas.

Overheard at Table 5: The Mortal Instruments - City of Bones

There is a device in the movie that it a portal, a gateway.  It looks somewhat like a gelatinous pool of water.  The hero tells the main character (the heroine) that you have to focus where you want to go, or you will end up in limbo, with no way of returning, lost forever.

I believe that into this pool is where the director threw the plot of the film.

Other than that, this film is basically like many other films, some of those others were good, some not so good - all of them better than this film. 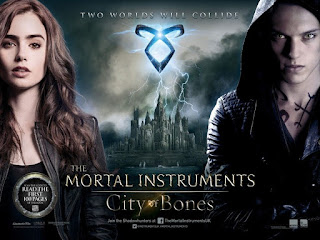 Let's see, we have the Twilight connection (werewolves vs. vampires), we have the Star Wars Empire Strikes Back ("Luke, I am your Father!") we even have the Star Wars, "ooh I kissed my brother!" aspect.  Only in this one they actually ARE sexually attracted to each other, even AFTER they find out that they are brother and sister (which is frankly, a little gross).  We have demon hunters and demons, which reminded me of Max Payne.

I could go on, but you get the point.

Except for one last point: as these characters roamed around all these ENORMOUS abandoned hotels and churches in Brooklyn, I was awestruck by the amount of unused space there still remains in New York City.

One last argument, though.  My wife insists that Lily Collins looks just like her father (Phil Collins).  I don't see it at all.   She's a lovely young lady and maybe some day she will have a movie in which she can have an actual role to play. 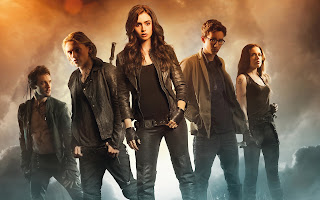 Dever Dodd:  How could anyone possibly want to vote for Donald Trump?  The guy's filed bankruptcy a billion times!

Clare O'Casey:  Only four times.  And it was corporate bankruptcy.  Never personal bankruptcy.  He uses Chapter 11 as a business tool.

Dever Dodd: That just means he knows how to cover his own ass.   Frankly, that ain't someone you want responsible for the lives of 310 million people!

Overheard at Table 3: On Gentrification

... you know what I don't get about all this buying up the houses in the Heights and putting up new ones?  They tear out all the old shit and just replace it with new shit that LOOKS like old shit ...

I call that BULLshit!