They say it's a place called Lydverket, but it's really one of the two interior stages at the Zen & Tao Acoustic Café!

Overheard at Table 3: Tales of Harvey: Song of Roland

Mack: People should sing songs about you, dude!

Roland: I wouldn't go THAT far.

Mack: Seriously, you got out in your boat and you were rescuing people.

Roland: So was everyone who had a boat.

Mack: Kris and I are really proud of you.  You are a hero.  A true hero.

Roland: Everyone was out there.  It's just a good thing so many people around here have boats. 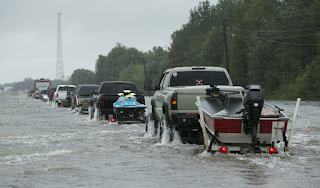 Overread at Table 2: from "Leaves of Autumn"

These were the days after the hurricane.
Summer left, limping, with a broken wing.

We swept what was left of the water from the concrete porch
into the grass, to wend its way through the smooth stones
into the French drain,
and disappear eventually, to the front of the house.

Every night, around dusk,
we walk together, barefoot, toward the mailbox
halfway down the block.

Hand in hand (most days), we
walk in silence,
breathing in the late afternoon;

it is as if, those days, we measure the movement of the
summer heat.  Our lungs are the daily barometer, the heaviness of
the humid Houston air.

With the advent of September, and the eventual creeping earlier
of dusk, the sun leaves us a few seconds, earlier each day,

we pull the mail from the box:
People en Español, Cinco Hill Review, the assorted
varieties of medical bills,

we are what was left when August no longer was.

Overheard at Table One: Tales of Harvey

The pastor tells the story of the man he met at the Cinco Hill High School, a 60-plus year old man, who had just had open heart surgery five weeks before.  House flooded.  Now he's on a cot in the high school auditorium, along with other people, and other families.

The Pastor:  "I asked him if he wanted us to arrange a host family for him, and he said that the school had already said that they had a lead on something, and anyway, he was all right where he was.  I went back the next day, and saw him still there.  He smiled super-wide and said 'I got adopted!'

"Just then I saw this little Latino walk in, with a son about 7 or 8 years old.   They brought her over.  She was the host family.  During the conversation, she said, 'He doesn't have any grandparents here.'

"Even in the middle of this tragedy, there ARE beautiful things that come out of the storm.   Families and friendships being formed that would never have been formed before.  And THAT is the working of God for good in the world."