Overheard at Booth 2: Beasts of No Nation This was a tough movie to watch.  Very tough.  I tried to determine what country it was set in and at about what time, without wanting to Google it while watching it.   Turns out that it is set in an unnamed African nation at an unnamed time, but it is so similar to the situations in so many African countries that it really can be taken as a snapshot of much of the continent - any country, any time.

From what I have read of 20th Century African history and contemporary reports, this movie touches a lot of what actually happens in situations such as these - warring factions battling for control, splintering into various factions: rebels vs government vs foreign troops vs bandits.   It's insane and often the people who are just trying to survive in villages have no idea who's doing what to whom.

Frankly, I found one scene impossible to watch.   If you see it, once you hear the world "melon" you'll know what I'm talking about.  The brutality and the savagery was almost sickening.   Yet, this movie is compelling, because you know implicitly that the reality is much much worse. 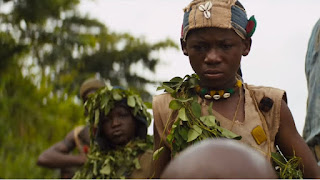 One of the best aspects of the movie is making the main characters multi-faceted.  It would have been easy to make (and had this been a normal Hollywood schlock, they WOULD HAVE MADE) the characters one-dimensional stereotypes.  Idris Elba is fantastic at being the leader of this group of soldiers.  In many ways, he is who he is both because of the choices that he makes as well as the situation that is forced upon him.   Wholly effective. 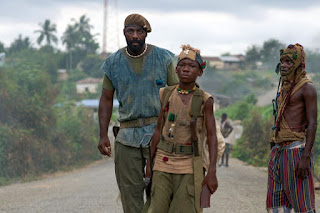 Again, do not watch this movie if you do not want to watch a cinematic representation of the lives that many people in this world live.

"Trump is that uncle that always shows up about every other year at the family gatherings.  He's always got a newer, younger wife with a boob job and the latest flashy car.  He's always talking about his business deals and showing off his Rolex even more than his new wife.   And everybody puts up with him, because they think he's a big gas bag and is, for the most part, harmless . . .

"That is - until the time you catch him trying to follow your sister into the bathroom!"