Jose:  I heard Rick Perry on the radio last week and he was talking about throwing his hat in the ring for President.

Jose:  You'll love this.  He said - let me see if I can remember it right - I kid you not he said something just like this - "If I was in the same room with Putin, I would look him straight in the eye, and I'd say, 'Vladimir . . . the USA is gonna fill all Europe with natural gas, and I'm signin' that bill TOO-day.'  And then I would get up and walk out of the room."

Mack: What a goob.

Jose:  Yeah, but that crap plays so well in the public.

Jose: If he's got the money behind him, he'll actually make it.

Mack: I have to admit, you did that smart ass Texas drawl of his pretty well.

Jose:  Thanks.  I've been practicing for when I run for Governor.

Mack: You'll have to change your name to Joe.

Jose: Not if I run in ten years.

Charlie says, "I keep hearing all this talk about this being a great time to be an entrepreneur but all of these guys keep saying the same thing over and over again that the way to make a successful business is to do what you love.  They say 'find what you love to do and go do that.'

"But what if the only thing I love to do is memorize Medieval Border Ballads?"

Mario says, "Then I guess you have to create an app that allows people do download you reading Medieval Border Ballads."

Charlie says, "Who in the hell is ever gonna pay for that?"

Mario, "I dunno.  I don't even know what the hell a Medieval Border Ballad is."

Overread at the Counter: Stevenson Under the Palm Trees

Stevenson Under the Palm Trees 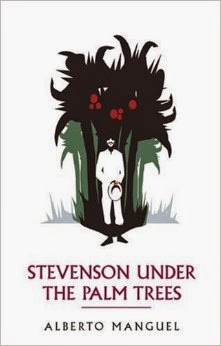 It's a slim book and it seems to be mostly about an envisioned Stephenson slowly going mad in the South Pacific.  Starts off with his wife burning his manuscript and then there's a rape of some kind, and it's all very hallucinogenic and it reminds me of Borges but I really can't say why but it's pretty cool because it seems to confound the writer with his creation, you know, as if Stephenson were really the Jeckyll and the Hyde, but which one did what?   For me, I thought it'd be cool if Gaugin suddenly popped out from around the next tree but that would have just been silly now that I think about it.

For me, it all comes down to the discussion about whether we can truly translate ourselves from one culture to another, and whatever culture we are raised in, we keep.  It is a part of us.  While we can appreciate another culture, and even bathe or wallow around in it, our own will always be there under the surface, like its own Jeckyll/Hyde issue - not necessarily stating that one is good or evil or any sort of somesuch homilies, but more like the conflicting personality types of that most famous of Stevenson's tales.

Overheard at Booth 4: Adults and Dependents

Sofia: My daughter has been on this crazy tear ever since she turned 18 last month.

Allegra: Ah, she's a good kid, I'm sure she's not doing anything too wild.

Sofia:  She didn't come home last night!  She left us as note, saying, "I know I'm grounded but I'm 18 and I've never been able to spend the night at my friends house." Then she also wrote that she wasn't doing drugs or getting tattooed or having sex or anything, but that she was just going to watch some movies and be home in the morning.

Allegra:  And was she home in the morning.

Allegra:  On some level you have to see that as too cute.

Allegra:  But she wrote you a NOTE!  Kids who don't give a shit what their parents think don't bother to write NOTES.  She was telling you that she loves you!

Overheard at the Counter: Alternative Radio

Verble: Years ago, in the 80s in this small city I was living in, while I was winding down the last few years making my second wife miserable enough to finally divorce me, there wasn't much really going on for me in my life.  Then I found this radio station.  It was fantastic, it was a true independent radio station, and it gave me that same excitement I'd had as a kid, with my old radio trying all night to dial in radio stations - looking for Rock Around the Clock and That's All Right Mama.

The Barista: Rock Around the Clock?

Verble: Yes, Rock Around the Clock.

The Barista: My God, how old ARE you?

Verble: Old enough to remember when children were chained up in the public square for asking questions like that.   Anyway, on this station you could hear Hank Thompson and then Motorhead, then The Replacements followed by Tito Puente.  They'd have dance then calypso then outlaw country, some Grandmaster Flash. They'd even through in some conjunto and polka. Late at night they'd go World, basically playing nothing in English all night long.   Sometimes they would even, in between songs, run old radio spots, some announcements from WW2, 50s radio commercials, even entire episodes of The Shadow.   Best song I ever heard on there was something from someone called Bongos Bass and Bob, "Thorazine Shuffle."  Never heard that song again and still can't find it today.

The Barista:  Sounds like your own personal musical nirvana.

Verble:  Yeah.   Station lasted only about two months.   One day I turned it on and it had been bought out by Top 40.   The instant I heard Starship's "Nothing's Gonna Stop Us Now" I knew that alternative radio was dead, dead, dead.

L: Almost done with my Masters and really it doesn't feel like I've really mastered anything except how to spend time away from the kids.

J: And that's a problem how?

L: Cut it out.  I feel like I'm missing out on their lives.  The other day Kaylie wanted me to take her to her 5k but her dad had to take her - again! - because I had to get online for a test and guess what, the site was down?

L: No, because they were already halfway across town!   So I just stayed there and cleaned house and kept checking back on the site every 15 minutes like some junkie.   whensthesiteup?  whensthesiteup?  Because I just knew if it came back up in the afternoon, THEN I'd have to miss our movie marathon Saturday night.

Overread at the Counter: Poem of the Day: Nahum to Nimrud

Nahum predicted the
destruction of Nineveh,

but the haters say that he wrote it
after the Thebes and Babylonians.

Immaterial.   Every city will be
destroyed, eventually, one day.

Every prediction of a downfall, thus,
is true. It's all in the timing.

Timing of the bulldozers,
driven by madmen, hellbent on

destroying Nimrud.   A tiny
ancient city in the desert.

Dust returns to dust, and our
history loses its shape.

We become formless, we become void.
Released into desert sands, we

Overheard at Table 2: One Friend to Another

Claire O'Casey: Sure, being able to marry my partner is fantastic, but how can I celebrate that when at the same time every state is slamming a clampdown on my reproductive rights, there is still rampant racial disparity in policing neighborhoods of color, and labor unions are being decimated?

Dever Dodd: You are SO hard to please.