Death of the Ball Turret Gunner

The Death of the Ball Turret Gunner
by Randall Jarrell

From my mother's sleep I fell into the State,
And I hunched in its belly till my wet fur froze.
Six miles from earth, loosed from its dream of life,
I woke to black flak and the nightmare fighters.
When I died they washed me out of the turret with a hose. 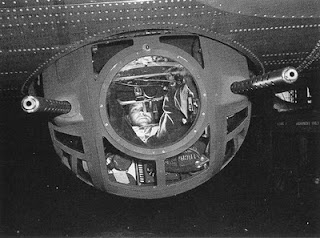 "A ball turret was a Plexiglas sphere set into the belly of a B-17 or B-24, and inhabited by two .50 caliber machine-guns and one man, a short small man. When this gunner tracked with his machine guns a fighter attacking his bomber from below, he revolved with the turret; hunched upside-down in his little sphere, he looked like the foetus in the womb. The fighters which attacked him were armed with cannon firing explosive shells. The hose was a steam hose." -- Jarrell's note.