Overheard at the Counter: Sucker Punch 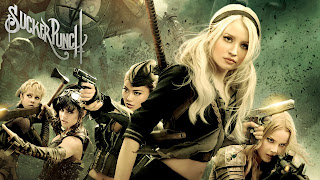 Well, I thought this would be good, because I loved "Watchmen" and because my wife loves the washboard stomachs of the "Spartan Hotties" (her words, not mine!), I thought "Sucker Punch" would be just as good.   I mean, the ads made it look like it had great FX and it's written and directed by the same guy, and yeah, I'll admit, what guy wouldn't want to see girls in thigh high boots r stockings kicking butt with big guns and swords?

But man!  You're watching this film and you're thinking, "with all this money that they can throw into a movie and they can't buy a decent script?"  It's just sad!

I mean, don't get me wrong, this is a beautiful movie, and I ain't just talking about the girls, the sets, the CG backgrounds, the lighting, it's all brilliant, and the idea is pretty good, too, you're floating in and out of stories, and you kinda know what the fantasy is, but sometimes the fantasy bleeds into the reality a bit, and that's cool, but overall, you're just left going, "OK, so now they're kicking robot butt." and you shrug your shoulders and wonder if you're playing Xbox rather than watching an actual movie.

I dunno, the best acting in the whole bit was David Carradine, and all his dialogue probably doesn't total more than two minutes of film time.

and by the way, girls, you can prance around in your undergarments all you want to, but Carla Gugino is hotter than all five of you combined.  Sorry, ladies! 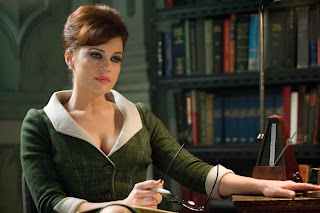