Overheard at Table 4: Email from a Castle in the Scottish Highlands - Mad Carnival

EMAIL FROM A CASTLE IN THE SCOTTISH HIGHLANDS

Haven't heard back from you, but haven't gotten any notification that your email address is undeliverable, so I'll just follow up with another email because I really want to tell you about the Mad Carnival, which was unbelievable!

Like I said, I hadn't seen much of the local village when I was passing through to come up here, but yes, it is absolutely the quaint village that you'd expect, with the two story buildings made of sand-colored stone as well as greys, with red brick chimneys from every roof top and spires of several churches peeking upward from the middle of them.  Just like something out of a postcard or what you would expect from late Medieval times.   Absolutely beautiful in its charm - although I guess that only we Americans find that charming.  Everybody else here seems to think it's just normal day-to-day run-of-the-mill town, which I suppose for them it is.

But when you come from a place where buildings made in the 1970s are considered "ancient architecture" and the cities tear down 20 year old buildings to make way for something brand new that will just be torn down again in 20years, having something that's been up since the time Knights roamed the lands, that's amazing! 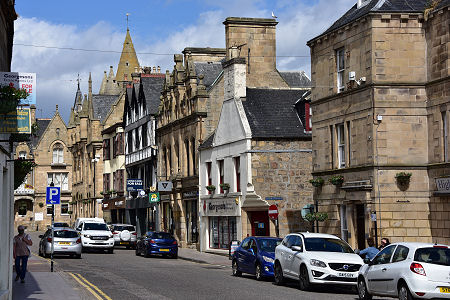 The Mad Carnival had set up in the town square, a conjunction of about three rows of buildings that meet in what seems to be the geographical center of town, which appears to be a bit of a dip from the hills around it, that become mountains that overlook it.  There is a river that flows nearby, underneath stone bridges that have probably seen invading Vikings as well as English and French and maybe even Roman troops. (I'll need to read more about it)

But as for the Mad Carnival, it was a freakshow on crack! such beautiful crazy characters all around, in steampunk costumes and renfair jumpsuits, top hats and ribbons and bows and skirts and swords and pirate boots and all sorts of delicious insanity.  It reminded me so much of the Halloween Hayrides you and I used to go on in Middleton Falls.

Strange thing happened near sundown. we were walking past the hatchet throwing and the woman on the spinning wheel, and the Ring-the-Bell, and then suddenly this Flame Thrower guy spits fire directly at the Baron!  Must have been an accident, but I kid you not, it seemed like the guy actually turned and shot it directly in his direction.  I just saw these flames going all up and down his arm and it looked like it covered his torso and his face, and then the next second, the Baron is just patting the flames off his coat.  Just patting them out with his hand!

And the flame thrower guy was all apologies and "beg yer pardon, suh!" and all that, and the Baron was superchill and just said, "Think nothing of it," and walked on, but I'm thinking, "He just got covered in FIRE!"  But we just walked on like nothing happened, except that the Baroness looked back once at the guy and seemed to mutter something under her breath, but I couldn't catch what it was.

And that wasn't the only thing.  Later on, there was this lady who came up to me while I was buying some legs of lamb for the family.  Had to keep asking her to repeat herself because she was speaking low and I couldn't really understand her accent, it was so thick, and finally, I could make out that she was asking me if I really was the butler for the family and I said that yes, I was.  And she said, "Mind yourself in that castle, strange happenings in that place, strange happenings, mind you." and it was the way she said it. "Strange happenings" - making the first word into two syllables and undulating the second word, it really just stuck in my brain, because in a second, she was gone, just as though she had been swallowed up by the crowd.

And when I got back to the rest with the Legs of Lamb, Essex takes one look and bellows out "THIS MEAT IS NOT AS TENDER AS MY MEAT!  THIS MEAT SHOULD BE BEATEN THE WAY I BEAT MY MEAT!" and so I figured the lady had probably heard him when he comes to the village to get supplies and stuff for the kitchen.  Essex, man, gotta love that guy!

But you know, now that I think of it, as we left that night, we walked back past the stall where the fire thrower was, and I didn't see him there, but there was a giant charred spot on the ground, right in the center, and that kinda looked a little strange to me.  Probably nothing, but I looked at the Baroness, Lara, and I saw her looking at the spot, too, and then she smiled, and then she turned those big brown eyes to me, and for a moment, I stopped.  Locked eyes with her, and she smiled, and then it seemed like time slowed down and her lips began to move, as though she was going to say something,

and then, I don't remember what happened between that time and the time we got back to the house.  Weird.

But maybe I'd just had a bit too much to drink.  But now, I've gotten all the stuff in from the cars, and everything is put away and I'm finishing up this email to you and then I'll have a few minutes of reading before bed, and tomorrow, I'll be at it again.

Still can't believe that I am a Butler in a Castle.

Marj, Sis, please please PLEASE write back as soon as you can, let me know that you are still out there.