Overheard at the Counter: Typology (by MR)


it is so sporadic how these fingers move
or (should I say?), get in the mood.


As they move against the type
setting the words in place, not so carefully
as one would hope, you know, but imagining, yes
these fingers imagine how
the laptop would have like to
have typed in the said calligraphic, or the
fluid Cyrillic, or the meandering
scribbles of tired scribes, offering Gallic
poems about cats, in the margins
of their exquisitely renderd Biblical
texts.


These fingers wonder if type created the
work, rather than the work merely presented
by type.   These fingers wonder would the
world be changed, irrevocably, if they could pound
this keyboard with some future typeset, perhaps
not letters, but in little smileys and pics,
emoticons, emos, instos, picpicpics, some little
mashed up goofface that has
eaten the last letter


of the last word 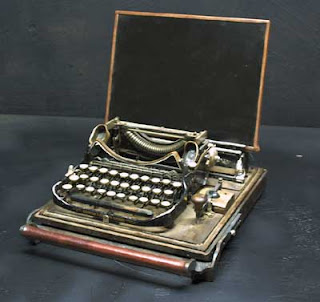 Photo property of its owner (whatever brilliant mind that is) - photo entitled "Steampunk Laptop"
Posted by zen and tao at 5:56 AM

Email ThisBlogThis!Share to TwitterShare to FacebookShare to Pinterest
Labels: 2013, Counter