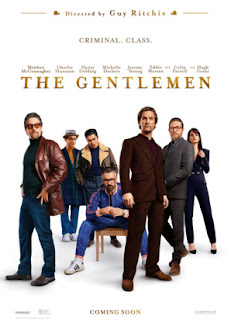 While I lately have been getting quite bored with the whole "Drug Dealers Are Our Heroes!" movement in cinema and film, this movie really does do a good spin on the whole, "I'm getting out of the business - oh no you're not!" tale.

Without giving too much away, Matthew McConaughey is himself ... in the role of a marijuana grower in England who is looking to cash out.  Hugh Grant is a sleazy writer who has something on McConaughey's second in command, I forget the actor's name but I think he starred in Sons of Anarchy ... anyway, it's also got Michelle Dockery who is always elegant and Colin Ferrell who is always awesome in any role, but is especially good in this role of a guy who just want to teach street kids how to box so that he can keep them out of trouble.

The best part of this movie is how the kids he helps try their best to help him .... but I shan't give away too much!  You have to see this film.

So basically, if you like films like Layer Cake and Snatch (which I think are also Guy Ritchie films but I could be wrong) then you will enjoy the hell out of this one.

My daughter doesn't like those films too much, but she loves watching Matthew McConaughey.

Which is pretty gross, because he's about my age.  She says, that doesn't matter, he can be her sugar daddy, and I am suddenly very uncomfortable and wondering why I wasn't a better father." 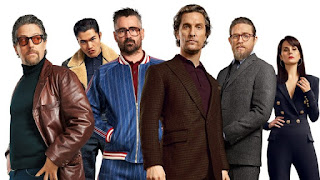 But dang!  This guy didn't like this film.... and what's wild is that I agree with him on all the others he mentions in his tirade: https://www.denofgeek.com/movies/the-gentlemen-review-a-dated-tawdry-trifle/