Abbey Road is just the code name I have for the big warehouse space I have out back.   You can imagine it's the real Abbey Road studios if you wish.  But I do thank David and Richard and the others for treating us to this song today!

Does anybody know what this movie is about?

I dunno.  I think you actually have to be playing Halo to know what it's about.

Don't you know?  You play every game known to man? 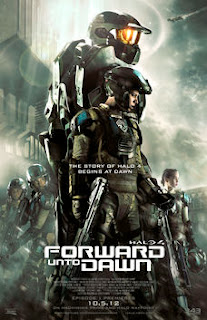 I'm a Call of Duty type of guy. 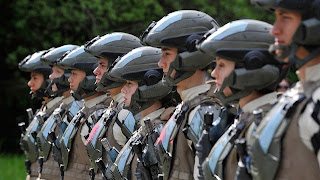 For some reason, that frightens me.

This little gem was sent to me by poets.org yesterday.   Had to read it several times, because it kept revealing nuanced sounds on each reading.   Mainly sounds of the rain, and occasionally the sound of a sheet of paper being gently slid behind one another.

So, basically, her sisters are Jehovah's witnesses and they can say, "Yahweh is great" and "Praise Jehovah," but my wife won't let me say "Praise Jesus!" around them because that might "offend" them.  What kind of baloney is that?!

I'm so tired of "boo hoo" Christianity.   Every Sunday it's the same sob story.  "The hedonists won't let us pray.  The ACLU won't let us have the 10 Commandments in front of schools.  The liberals don't want us to say the name Jesus.  The intellectuals want us all to gay marry and make our teenager daughters have abortions."

If we as Christians truly know that we serve the Creator of LIFE THE UNIVERSE AND EVERYTHING, then we have absolutely nothing to whine about!   But still we prance around like a bunch of mewling babes like "wah wah some mean bad ol' liberals took away our lollipops!"

Christianity has nothing to whine about.  It's had pretty much a free ride for the last millennium or so, and quite frankly, if people are anti-Christianity, it's because we Christians have done such a piss-poor job of representing our Christ.

Look, can we expect some Muslim to spread the message of Christ?  Some atheist?  Some Buddhist?  Nooo, we Christians have to spread the message of the love of Jesus Christ.  Frankly, if we had been doing our jobs all these years, every one would be a Christ follower now.   The fact that they are not just proves that we, as Christians, are sloppy, lazy, and frankly, incompetent.

So let's get over this "boo hoo - the world's against us" Christianity and get out there and start digging wells, feeding the hungry, building shelters for the homeless, bringing medicine to the sick, protecting the innocent, seeking justice for those who have been wronged, and providing comfort and companionship for the incarcerated.

Let's get out there and start WORKING!

Overheard at Booth 3: On Our 8th Wedding Anniversary

The Woman: I know you say you love them and all that and I really do thank you for helping me raise my kids, but they're teenagers now and they really need your support and you need to stop hushing them and acting like they're bothering you and always getting on to them for talking back to me and I know they're rude sometimes but you're always on their case and if you don't start acting like the father that they need well I don't know how much longer this can go on and Thomas really needs you right now because he's crying out for a dad figure and God knows I don't want him around his bio-dad but at least he acts the way a real man is supposed to act and Ginny she just needs some man to look up to as a dad and she can't do that with you because you never stand up for anything and she needs someone to help her look for summer jobs and how can she use you as someone to look up to when all you are is some guy who's been stuck in the same job he hates for 11 years and what do you think, you've been really quiet this whole time, what are your thoughts?

Left on the table at Booth 2, one sheet of paper, half-filled with this one paragraph, obviously some teenager's Spanish schoolwork.

Sadly, they left no name, no date, no way to mark their existence.  Just their words.   How like some of the cultures:

Email ThisBlogThis!Share to TwitterShare to FacebookShare to Pinterest
Labels: Booth 2

Overheard at Table 3: Maya and the Wheel

Steingold: Yeah, but the Maya never invented the wheel.

Feinstein: They didn't NEED the wheel, they were in the jungle!   "Over the river and through the trees" up and down, up and down . . . you can't USE a wheel in the jungle.   The reason why the wheel was such a great invention for the Near East and Europe is because there were plains, there was gently sloping hills, there were vast areas that could be covered by carts.    Don't give me the "wheel" excuse: the Maya were doing brain surgery while Europeans were still living in caves going "wow!  we make fire!  we eat good!"

Overheard at Table 1: When God Will Bless America

C: God will only bless America when people turn away from their sin.

M: And what sin would that be?

C: Abortion, gay marriage, fornication, adultery, sleeping around, doing drugs, stealing from the government by being on welfare when they should be able to get a job . . . things like that.

M: It doesn't include anger, rage, pride, hypocrisy, it doesn't include the incessant greed, the clamoring for wealth, people backbiting and sniveling and ripping each other for jobs, for bosses who find ways to get rid of their employees, for laying off 3000 workers so the CEO can get a $17MILLION dollar bonus that year, for companies that cut corners so that oil rigs blow up in the middle of the Gulf of Mexico, for chicken plants that dump chickenshit in streams and make cities sick, for food processing plants that keep Mexican workers in cellars underground, for 7-11s that keep Pakistani workers enslaved, for Wal-Mart that keeps foreign workers working 20 hour days in sweatshops so that we can enjoy $7 t-shirts, for all the graft that keeps inner city kids from having safe schools, from all the paid off cops who turn a blind eye when gangs kill each other, for the rampant poverty that creates an atmosphere of drug addiction and gangland killings, for all the people who can't handle their desires because all this culture pumps into them is do what makes you feel good right now right now gotta have it right now!

M: And that's just the beginning . . . you haven't even SEEN me froth, my dear!   But you want to talk sin?   We Christians always want to talk sin, but we NEVER want to talk about the biggest sin, which is our arrogant pride that we call "Patriotism"    If God were to truly bless America, he would destroy it.

Overheard at Table 3: Iron Man 3 and the Christian Linking of Arms 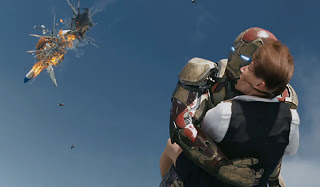 Don't want nobody giving me no flack abo 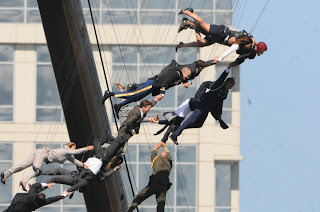 ut how this is a $300 million movie with 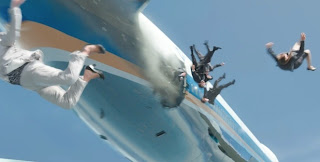 no plot.   Listen, you don't GO to Marvel movies if you wanna see PLOT.
You wanna see plot?  go watch a Spielberg or something, but I
have to tell you, this movie had something in it that blew me away BIG TIME!
The scene where he saves the 13 people!
Blew - me - away ....
why?
because, as he was doing it, as he was falling, he asked
his little computer headset could he do it., and he didn't have the power to save them all,
so he said to them, let's play BARRELFUL OF MONKEYS.
He had them LINK ARMS!
They DISTRIBUTED THE WEIGHT.
they made it bearable, because they helped each other, and all the time I'm thinking, 'you know, that's just like us talking about the message of Jesus Christ. . . WE can't save everybody (yeah, I know I know "WE" don't save anybody, HE does, but you know what I'm saying, we can't
be there for everybody, we can't get the message out to everybody, it takes
us
giving the message and then
the others
passing it on, and then
they
pass it on to still more, and we're SHARING
the gospel of Jesus Christ, and it just goes on and on down the chain.
You know, we're all falling.
We'll fall at different speeds, and we'll hit the ground at
different times, but we're all falling, but with the word of GOD
linking us together, we're going to have a soft landing in the
LIVING WATER
instead of some hard splat on the hot concrete ground!
Well, that's what I took out of it anyway,
I saw that scene, man, and I was the guy
going WHOOOOOOOOO HOOOOOOOO!!!!!
but then, everybody in the theatre joined in and we was all going
WHOOOOOOOOO HOOOOOOOOO!!!!
so it was all good!

June's Songs of the Day