Transgender activist and actors/actresses spend two hours railing against the unfavorable representation of transgenderism in a century of film history.

While important, it does not truly put into context the fact that there was no comprehensive and widely known language for transgenderism during that century, and as such the documentary slides into the trap of imposition of modern mores onto prior eras, which essentially sets up a somewhat unsolvable problem, because those times are gone, done.  They have made their mark, they have made their product, and those who made the movies who made fun of the LGBTQ community were themselves products of their time.

What impacted me most were the actresses who have taken roles in recent television shows and then have a sharp critique of how transwomen were portrayed.  I was left only with the thought, "But you contributed to that.  You said you wanted to sit up during the scene and say 'this is not what this is like!' but you didn't.  You took the job, and thus you contributed to the storyline." 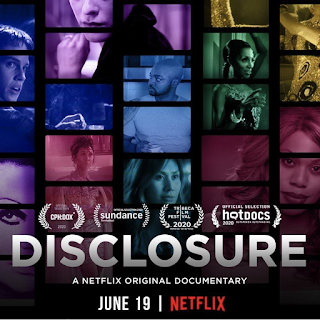 One scene truly impacted me.  Seeing a transwoman in a 1973 clip yelling at a crowd of people how she had been beaten, had her nose broken, lost apartments, lost jobs, just for being a transwoman - that felt real.  That was heartfelt.  That was impactful.  And while I myself will never know the pain that it must be like to have to face such negative societal reactions for being gender non-conforming, I can say that the clip from 1973 carried much more emotional impact that an actress offended by a transvestite showing her breasts in the 1985 movie "Just One of the Boys" - a movie which, by the way, my wife said was one of the first movies she saw when she came to the USA, so we watched that one next.

As the documentary ended, my wife said, "So, whenever you have wandering eyes, just remember that woman you lust after could have been born male."

To which I replied, "Well, baby, since you are the only person I am going to be with until I die, it's really not much of an issue, but as far as looking goes, hey, if she's a woman's hot, she's hot.  And like fine art, I am just a man who appreciates beauty.   Just sayin."