While slightly better than Polar, Close is another "oh boy here's another hitman/bodyguard" that is the "ultimate fighting machine"  - This time it's Noomi Rapace who actually CAN act, by the way, although she is somewhat lost in this film.   Basically, this seems like a role that she knocked off in a month in between other more challenging roles.  She can do "moody" and "brooding" in her sleep, as we know what kind of intensity she brought to "Girl with the Dragon Tattoo" 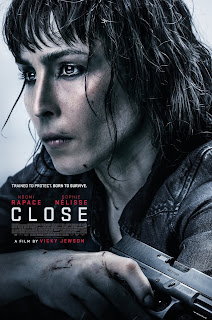 So, if you want to watch her stab people and break necks in vulgar ways, then this is the movie for you.  Other than that, it's a convoluted plot... oh hell, "convoluted" is too generous... it's a frikking mess of a plot.  They come back to certain scenes that makes it feel like they ran out of film locations and had reached the end of their budget.    But if you like Polar, then you'll like this, but you won't get the same high because it's got only about 1/2 the spewing open sewer mains of blood and gore