Overheard at Table 3: Because those two-year-old illegals are taking your jobs . . . 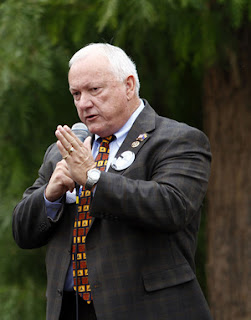 . . . this man wants to keep them locked up. Not really because he really gives a smelly bowel movement about the mistaken ideal that "we need to keep America safe from the brown invasion" no, that's just the line he uses to make stupid people - and by stupid people I mean 90% of the American population - yeah, that's right, I said it - because this man, see this picture right here? I made it my cellphone background so I will always remember what evil looks like - this man is behind the Arizona Immigrant Law that SAYS it's going to 'keep America safe' but in reality just builds new holding facilities to hold INDEFINITELY those people who are here illegally - yeah, sure, I said illegal. So what? So we hold women and children, that's what these prisons are built for. These guys have already done the cost analysis and they figure that they can keep women and children for much longer than men, because men are easier to deport and women and children are much more complicated - because you gotta prove if the babies are born here or not, and you gotta take into consideration the culture shock of sending back an eight-year-old boy who doesn't even SPEAK Spanish, much less know what Mexico is like - no, THIS guy wants to build those facilities, because it will make him MONEYMONEYMONEYMONEYMONEY - incarceration is BIG BUSINESS, and this man pushed through the Arizona immigrant law telling the people that it was to fight drugs, crime, 'stealing your jobs' - and that is a load of crap! It was all a freaking snow job, because these guys are going to build HUGE jails for immigrant women and immigrant children. And they know that we Americans won't give a damn, because these women and children are not US, they are THEM, and these a-holes are banking on that!

Take a look at this man. This is the face of evil. And this is the reflection of all Americans if we don't stand up and DRAG our politicians out of the deep pockets of Big Business like the Private-Prison industry.