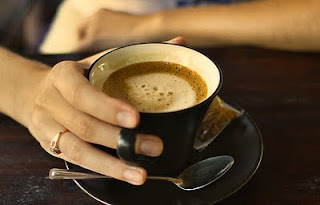 Husband: Your sister's moving back to Topeka, she just called me right before I got here.

Wife: So she decided to go back home? I knew she would. She moved here too fast, too soon.

Husband: Yeah, she also said something about how realizing that she really missed some guy that she's known forever but never really gave a second thought. Apparently he was going over the house regularly, taking care of her lawn.

Wife: Hm. She never told us about this guy.

Husband: Well, funny thing is, she said she was discussing it with Heather, and she was telling her that she never gave the guy serious consideration, because he was a little quirky, and apparently Heather said, "Well, it worked for Aunt Sofia."

Wife: They were saying you're quirky?!

Husband: Apparently so - but she told me all the sisters agree that you turned out the happiest, so she said she's gonna go for it and try to start dating the quirky guy.

Husband: Yup! Let's hear it for the quirky guys!
Posted by zen and tao at 4:47 AM

Email ThisBlogThis!Share to TwitterShare to FacebookShare to Pinterest
Labels: Booth 2