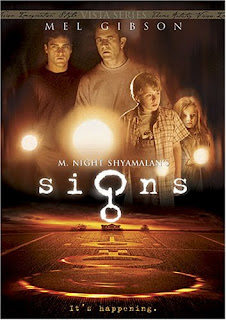 I finally, after all these years, saw M Night Shyamalan's Signs. Remember when it first came out. Lots of people liked it. Not as much as they liked The Sixth Sense, but they liked it. Can't remember which movie came out first - Signs or The Sixth Sense. Think it was Signs, but I can't be sure.

It's good. Really good. In fact, it is when sci-fi is at its best. When it just lets the story unfold and doesn't try to spell everything out or try to explain itself away. It's just a story of this family at this particular time. It's kind of like Orson Wells's radio adaptation of H.G. Wells's War of the Worlds, in the way that the whole thing unfolds. I also got kind of a glimpse of Area 9, or whatever was the name of that movie with the alien ship in South Africa - Precinct 9, was it? But that movie was later, so it probably had a little bit of homage to this one.

It also reminded me of Lady in the Water, another of Shyamalan's movies, in the idea that everything happens for a reason, that everything happens for a purpose, there is a meaning in each thing that we do. That's also a Christian ethic. Taken by some to believe that we can't fight destiny, but that's an overreach and really misses the point. I think Shyamalan gets the point. We make our own destiny. We just have to see the signs. In our own lives. Take everything that we learn. Realize there's a point to what we do, what we train for, everything that happened to us in the past will help us at that one point when we need it most.

I don't know, but I think Shyamalan had John Irving's A Prayer for Owen Meany in mind when he was writing the script for this one. Not sure, but this movie was about a decade after the book. He could have read it. Don't know. It's not a plot inspiration, no, they're totally different stories. But the idea behind it. The idea of purpose. Of everything in your life being interconnected. That's definitely there.

Signs. Makes you think. Makes you stop and reconsider every detail of the movie. This guy is the only director I can think of out there today making movies like this. There were a lot in the past. We study them in school. If you take the classes. I think he'll be one in the future.

Ever see The Village? Still his best. People hated it. They wanted a horror movie. He gave 'em something totally different.

Wanna watch it sometimes? We need a Shyamalan movie marathon. That'd be cool.
Posted by zen and tao at 11:57 AM