I suppose the wife and I were still in our 80's movie mode, because for some reason she suggested we watch "The Witches of Eastwick" and to be honest we were both a little miffed that we still had to pay four bucks for an 80s movies, but what the heck, we thought...

Not a bad movie.  Little cheesy and the special effects must have been decent for the time period, but look a little silly now..

I have to say that Jack Nicholson is Jack Nicholson, and him playing the Devil was no different than him playing Jack Torrence in The Shining (but that still is his most superlative role ... everything else has simply been a shadow of that character after that, it seems) and Cher, Susan Sarandon, and Michelle Pfeiffer just seem to be stereotypes ... the "biker" chick, the baby momma, and the old maid ... who is the sexual tigress who just needed to be awakened.

All in all, it seemed to rather revel in the same feminine mystique myths that it purportedly was trying to dispel; however, one bright aspect was the fact that the male figure (The Devil) who seduced the women by claiming to respect them, in the end throws tantrums like a little child because they don't give him what he wants.

That part, I thought, seemed very accurate regarding the male of the human species: in the end, all a guy wants is to have the woman's entire attention be on him.

Rather pathetic, in a way. 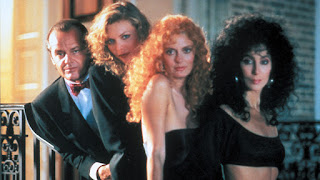