Overheard at Table 3: The Girl in the Spider's Web 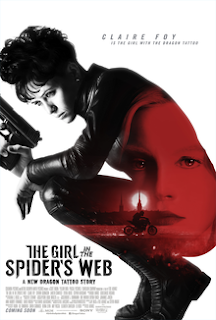 Saw this on Prime.  Thought we hadn't seen it.  Wife thought we had, but wasn't sure, so we watched it.

Unfortunately, I hit the wrong button and bought the damn thing for $20.  This was in the middle of the COVID epidemic and we hadn't been to the theatre in months, so I was thinking we'd already saved more than that by just not going.

To be honest, after watching it, I still can't tell if we've seen it or not.  Until I was looking through an old notebook and on a page where other notes referenced dates of April 2019, there was written:  THE GIRL IN THE SPIDERS WEB - CLAIRE FOY

This either indicates we did see it and I had planned to write about it, or I had seen the promo and intended to watch it.

Either way, this move is, for the most part, forgettable.  Only the opening scene of her brutalizing the abuser has any sort of real tension, and even that seems a bit contrived.  The whole "you left me in the hands of our molestor/father so I hate you but it made me a powerful woman hell bent on world domination" theme is hard to follow.  Especially since the time frame is all wrong.  By the time Lisbeth was rescuing young girls from molester fathers, her older sister was already an adult as well.  So there is no real point to this whole mess of a movie.

But, I must admit, Claire Foy does indeed have the sexiest pout I think I've ever seen.  Just had to throw that in there.  But even that pout can not carry this clunker of a movie.  Go watch "Inglorious Basterds" again if you want your cool action violent revenge fix.