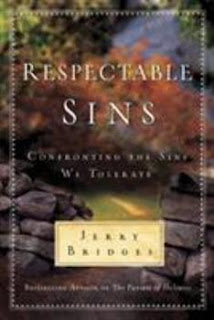 Fairly good book.  Doesn't get to the actual sin that I see that this society loves, but at least it addresses arrogance and pride.

Lately, during my walk with Jesus and continuing study of the Bible, I am finding that we have a tremendous difficulty in American society in appropriately addressing our addiction to monetary wealth.

By that, I mean, I have never read a book by a Christian scholar nor heard a sermon by any pastor that takes James 5:1-2 directly at its word.  Every time the book of James is approached, that part is skimmed over, watered down, excused.  "Oh God is really only talking about people who WORSHIP money."

Yet, no one ever waters down Romans 1:27

In the same way the men also abandoned natural relations with women and were inflamed with lust for one another. Men committed shameful acts with other men, and received in themselves the due penalty for their error.

Pastors and Christians will go all day long standing firm on the Bible and blasting homosexuality, but they will never say the exact words of James 5:1-2

Now listen, you rich people, weep and wail because of the misery that is coming on you. Your wealth has rotted, and moths have eaten your clothes.

Note how this passage does not say "you people who worship money."  It says, "rich PEOPLE"  But OK, while you now go hunt for passages to try to dilute this warning, I will state that the book does a great job of identifying the sins of ingratitude, selfishness, anger, pride ... many contained within their own chapters, which makes this book a good sounding board for a weekly Bible study, should the study giver delve in with Biblical passages to round out the subject of each chapter.

Additionally, Bridges is spot on in reminding us of our purely human ability to rank sins by severity.  For example, flipping off someone on the highway is not the same as raping your niece, right?

Not in the eyes of God.

Now, as you go and try to argue that, just realize that I instinctively want to say the same thing.  I've flipped off many people on the highway and I've never raped my niece (nor anybody else, for that matter) and so I want to think that I am "better" ... which I am, according to human law.  Not in the eyes of God.  A sin is a sin is a sin is a sin, no matter how we may try to put it on a gradation of "sinfulness."

All that to say, in short, it's a good book, a necessary book, and a good start to the re-evaluation that we all need as Followers of Christ.  Let us use this to look at the sins that we allow in ourselves while we condemn others, and then let us repent, turn back to Christ, and let the Holy Spirit indwell in us to work out our salvation.

P.S. "Working out our salvation" is also Biblical, but sometimes this too needs an explanation.  More on that on a different rant...