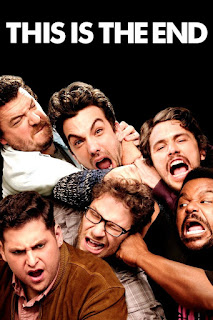 The most interesting part of this movie was an interview I heard with Seth Rogan describing how his friends had one Christian friend, who was the nicest guy in the world, and they asked him one night,
"Hey man do you think we're all going to Hell?" and their Christian friend just said matter-of-factly "Yes.  Yes I do."

And he just thought that was weird, and that conversation was the genesis of this movie.

The result was some sort of quasi-tragic-comedy about Hell being unleashed on Earth, and the ultimate way to Heaven was doing one selfless act.  One act of sacrifice.

But that misses the point of what Christ taught, entirely.

Again, the world thinks that somehow if you are "just good enough!" then you will get to Heaven.

Not what Christ taught.  Not at all.

I suppose every cast member playing themselves was fairly ingenious, and I thought the idea of Michael Cera being a total douche was somewhat funny.

Overall, not really a movie that you HAVE to see ... but if there is nothing else on and you want an apocalyptic movie with a few cheap laughs, this would fit the bill.