Overread at Table 2: Selection from American Fascist 2019 "Omar vs the Tropes"


In 2019, Representative Ilhan Omar tweeted an incendiary tweet.  Incendiary only because it dared to call Israel's motives into question. 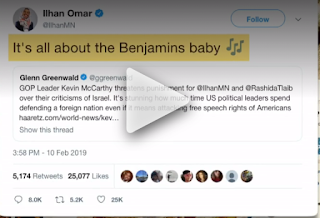 Since the American people have a difficult time distinguishing among Judaism the religion, Jewishness the culture, and Israel the apartheid state, to comment on the government apparently means you want to throw each person with -stein or -berg at the end of their name into a gas oven.

So, during that day, MR wrote a few slight sketches of that might have gone into Comedy Sketchbook ... if MR had a real show.

Omar vs the Tropes


Omar says, “AIPAC is all about the benjamins!”

Omar says, “Why should I be forced to pledge allegiance to a foreign country to be on the Intelligence Commission?”

Omar says, “The best bagels are found in Manhattan.”

Everyone replies, “The New York Jew Trope!  Anti-Semite!  Burn her!”

Omar says, “Maybe Israel should use some restraint against military force in Gaza.”

Everyone replies, “She wants Israel to be wiped off the face the earth!  Anti-Semite!  Kick her back to Somalia!”

Everyone replies, “She hates Jews!  Crucify her!”

Omar says, “If I knew you were coming I’d’ve baked a cake.”

Everyone replies, “Jews were killed in ovens!  She wants to bake a KIKE!”