Overheard at the Counter: Dover Butch (a late addition to the trilogy) 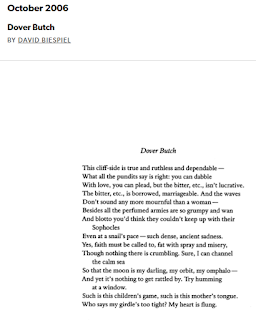 MR
"Here's an interesting little ditty.  A recent addition I just happened across today.  Since this is the first time I've read it, I don't have as deep an opinion as with the first two poems I've talked about, but at least this one doesn't seem to be as pandering to the unnamed female as the first two.  In fact, it seems to be simply made up of cut up words and phrases from "Beach" and "Bitch" ... and then randomly sewn back together into this.   Indeed, this probably should actually be the third of the trilogy and perhaps 'Sea of Faith' should be kicked out as some sort of Reprise or Slight Return.   I don't know.   But at least this one seems to be making fun of the supposedly male aspects of the first ('perfumed armies') and placing the admiration of the woman onto ideals (faith called to, fat with spray ... the moon is my darling)... yes, this may need some more review, because in some ways I think it's just a bunch of blather, but that might be the point.  Definitely making fun of the first two poems, most definitely.   Hm.   I wonder if I will still like it many years hence."