Augustus says, "While the point of Black History Month is really supposed to be about notable Americans of Color, there is one who contributed a great deal to medicine here in America before it became a country.   His name is Onesimus, and no one knows much about him, but he is credited for bringing the concept of inoculation to the New World from ancient medical practices in Africa.

"Onesimus was given as a gift to Cotton Mather, and through his showing of Mather the practice of inoculation, he was able to decrease the death count in Boston during an outbreak of smallpox.

"This is just one of the countless contributions of Africans and African-Americans to the medical history of this country, and it shows how, even when human beings are being subjugated, oppressed, and sold like animals to other humans, they STILL find a way to contribute to the continuance of the entire human race." 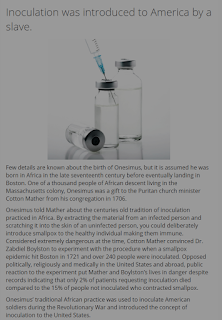 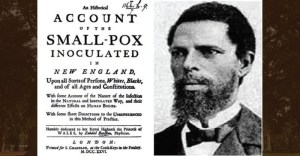