Overheard at Booth 3: Mamie Till

"Mamie Till did the unthinkable: she had Emmitt Till's casket opened, so that everybody could see what happened when monsters are allowed to roam the earth.   Most mothers would have had the casket closed so that the smashed unrecognizable face of their son wouldn't be emblazoned in the memory of those who came to pay their respects, but she said no, she knew that this had to be done, so that the white demons who slaughtered her child with less care than they would slaughter an animal would know that their crime would not be covered up, it would be exposed.

"And exposed it was.  This woman had the strength, courage, and conviction that most people would not have, and for that single sacrificial act, she should be forever remembered as a beacon of light in this dark world of racism and hate and rage." 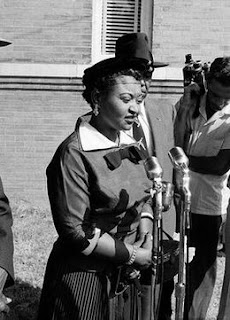 https://www.tspr.org/post/heroism-and-activism-mamie-till-mobley
Posted by zen and tao at 2:19 PM