Ada says, "Well, shoot, I never knew that there was someone before Claudette Colvin!    Seems like there is always more to learn about our history!

"This woman is amazing, and I'm amazed I never knew her story... read it here! 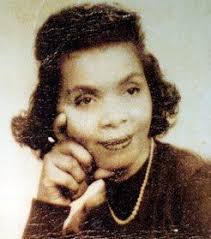 Irene Amos was born on April 9, 1917 in Baltimore, Maryland to Robert and Ethel Amos. She attended the local elementary school, and was raised as a Seventh-day Adventist along with her eight other siblings. Amos dropped out of high school to work and help her family during the Great Depression. She worked on the production line for B-26 Marauders at the Glenn L. Martin Aircraft Company in Baltimore. There she met dock worker Sherwood Morgan and the couple soon married and had a son, Sherwood Jr., and a daughter, Brenda.

Morgan was spending time with her mother in Gloucester, Virginia after a recent miscarriage. On July 16, 1944, she bought a $5 ticket from the “colored” window at nearby Haye’s Grocery Store and boarded a Greyhound bus to return home to Baltimore, Maryland. She sat in the back of the bus, the spot designated for “colored” people. An hour into the trip, the driver came to Morgan and the woman seated next to her with a baby in her arms, and told them both to move for a white couple just boarding. Morgan refused to move, and the driver proceeded to the next town to have her arrested.

The officer gave Morgan an arrest warrant and she tore it up in his face. When the officer tried to forcibly remove her, she kicked him in the groin. Other officers responded and removed Morgan from the bus. She was arrested in Saluda, Virginia, and charged with resisting arrest and violating Virginia’s Jim Crow transit laws. Morgan pleaded guilty to the charge of resisting arrest and paid a $10 fine, but refused to plead guilty for violating “Jim Crow laws.” She appealed her conviction and was represented by William H. Hastie, with Thurgood Marshall as co-counsel. The Virginia Supreme Court ruled her in violation of the law, so she took her case, Irene Morgan v. Commonwealth of Virginia, to the U.S. Supreme Court. The Court ruled 6-1 in her favor that enforcing Virginia’s state law on interstate buses was unconstitutional.