Should have been called "Extinction" because that's what Chris Hemsworth did to just about every police officer in India. 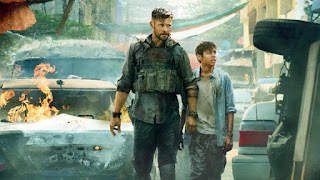 My wife tells me that Chris Hemsworth was interviewed about this movie, saying that while he wants to expand his range as an actor, this movie script had something special in it that made him want to do the film.

I can't imagine what that is, because it's a bloodbath from start to finish, with a weak plot and cutout characters.   The cop on the take, the rival drug cartel leaders, the old friend who sells out the hero for cash ...

in fact the only truly defined character in the story is a minor character, a 14 year old boy who cuts off his own finger to show his loyalty to the drug lord, after he has saved one of the other street urchins lives from being thrown off a building by the same drug lord.   But then, he is only truly defined by the other 14 year old boy, the one being extracted, who is the son of the rival drug lord.  The contrast shows how the one has access to almost limitless resources (and yet spends his time in clubs doing drugs - until he gets kidnapped and tortured, of course), and the street urchin, who has no hope and no future except to work his way up through the rungs of the ladder of the criminal underworld.

But that is mere extrapolation.  Watch the movie to pretend you're in a video game, slaughtering every hooded soldier in India, in graphic ways, with guns, knives, and even each other.

bang bang blood splatter bang bang more blood explosions ... the body count is as high as the number of dollars needed to make this film.

Enjoy your buckets of blood!