This movie has been panned by all reviews, and rightfully so.
This movie really doesn't need me to pile on top of it, beating it to a bloody pulp so that it never dares get off the ground ... but I will anyway.

I got this turkey from Redbox for my wife because she loves Robert Downey Jr.  In fact, she would run away with him if she could.  And since Like a Boss, which has Salma Hayek (with whom I would run away with if I could) was not yet at Redbox, this is the one I brought home.

For starters, it seems like we missed a movie.  There was an entire backstory crammed into 2 minutes of animation
that was supposed to give us the reason why Doolittle has gone unshaven and unbathed for the past decade.  On top of that, he mumbles like a drunken stroke victim ... which one review explained that Downey said in an interview he wanted to do something "interesting" - like a Welsh accent of an eccentric doctor.   Well, it may have been slightly Welsh and entirely eccentric, but it wasn't interesting.  It was downright annoying.  I don't see how the animals could understand him, because no human could. 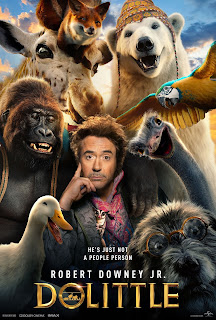 Banderas and Sheen and Broadbent and Thompson are all actors of solid calibre, but all the live action characters were far more cartoonish than the CG animals.   By FAR.  Sheen and Broadbent were like the Shakespearean lackeys Rosencrantz and Gildenstern: there only for slapstick Three Stooges comedy and to be killed off without a thought when their purpose was served.   Banderas, who only had about 5 lines, was a paper cutout of a comic book pirate.

Thompson and John Cena and Remi Malek brought a fair bit of humanity to the parrot, the Polar Bear, and the Ape.   They were possibly the only bright spots in an otherwise dismal film.    The three of them probably should have absconded with the boat, left all the humans ashore, and sailed off into their own movie, which would be far more interesting and infinitely more coherent.

Still though, sadly, even this terrible film cannot deter my wife from her dream of running away with Robert Downey Jr.   Let's see if Like a Boss can deter me from mine.