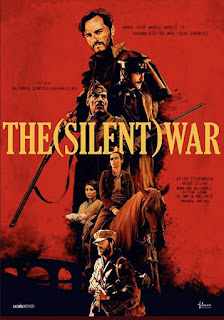 Wow.  Amazing.  A spañol movie on Netflix that can totally be missed.  Up until this turkey, my wife and I have loved every movie made by the Spaniards that Netflix has brought out (except I must admit we have mixed feelings about the second installment of La Cada de Papel, but more on that later).

This movie is bad and just gets worse.  It's like some guy wants so bad to be considered the love child of Sergio Leone and Quinton Tarantino that he studied all their shots and camera angles and never once learned how to write a coherent story with decent dialogue.

And geez!  Don't even get me started on the rape scene.  That was just grotesque and pointless.   The uber-killer Russian sniper/torturer/assassin/badass/killer who committed the rape of the witless woman who is the wife of the one rebel in custody and the lover of his best friend (the guy who the Spanish Fascists are trying to locate and kill) just comes across as flat and robotic.  No reason for her complete obsession with destroying all life except some silly backstory about the Russian army putting a gun into her hand at 14 years old and then suddenly she "walked into and out of Hell on the battlefield daily!"

However, when she raped the heroine (for lack of a better term) it did lead my wife and I to argue about whether or not she was a lesbian.  I thought I won by saying rape is not sexual, it's about power, and the Russian psycho killer had power over the woman by raping her and power over men by killing them.    Then my wife said, "See!  She sees women with more value than men.  She lets women live.  Because she loves the women!"

OK, honey, sure ...  still, raping her with a Mauser ... sight and all.  ICK!  and then smearing the woman's own blood on her cheek with the barrel of the gun?
And then the woman is sleeping with our hiding guy within two weeks, I'm wondering if she'd really be healed by that time ... just gives me the heebie jeebies

Well, I've just given you all the gross parts ... except for the shotgun blast blowing off half a head.  No real point in that, but that just about sums up the movie ... no real point. 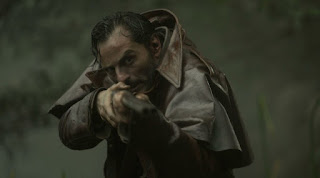 Here's a better review than what I could have written, saying about the same thing, but more eloquently: