Dam'right.  NPR had this guy on there talking about it, he said that the design was based on the same design that he did for the Guggenheim Museum.

Yeah, this house was just like it.  It's got no stairs, it just goes around and around in a big circle and all the rooms are one th second floor, none of the rooms are on the first floor.   So the first floor is just to enjoy the foundation that the place stands on, apparently, to get a feel for the rock that it stnads on, and he said it ws designed so that as you walk around the house you get a 360 degree panoramic view of all the scenery around the area.

Sounds beautiful.  Why do they want to tear it down?

Developers bought it and they want to demolish it to build three houses.  Apparently it's in a really rich neighborhood in Phoenix, and these guys just figured they could make some more money.

But that's a landmark.

Seems like they don't have it registered as a landmark.   The story goes he built it for his son. Then when they died it went up on auction.  Some lady bought it two years ago, but she couldn't keep it up, so she sold it beginning of this year, and these two contractors bought it for 1.5 million so they could tear it down and build others. 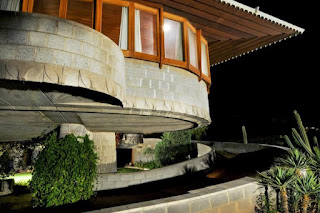 I think they're bastards.   I think these bastards who just want to make money, even if it means tearing out our national heritage.  Should be criminalized.   I mean, Frank Lloyd Wright is one of those masters, one of those artists, who built houses that no one else could ever build.  He could see things that no one else could see.   He was like our Da Vinci, our Picasso, our Dali.

He was an American Icon.

Right!   And now he's gone, and every single one of his houses should be preserved.

So when are they going to demolish it?

I dunno.  The radio said that they were gonna stop for a few days, and when I looked it up just before I got here there was a blurb that read the Frank Lloyd Wright group in Chicago contacted the city of Phoenix to have it stopped, but I don't know.

That's just terrible.  Beautiful things, all art, anything genius, that's just got to be preserved. 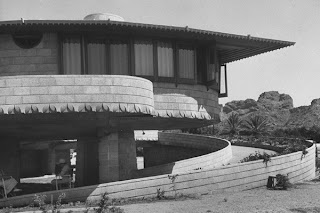 Email ThisBlogThis!Share to TwitterShare to FacebookShare to Pinterest
Labels: 2012, Table 4