Overheard at Booth 4: Rise of the Planet of the Apes 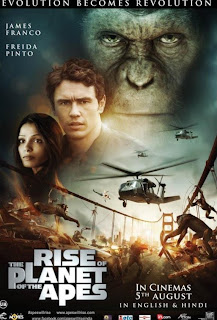 Helfway thru ay was worried thut the udders might not be so completely into it, like, as it wuz sometimes not on the plot-plan as normal viddies, yuh-knoo?

but 'twas allright allright, it kept going, even tho' there wuz a duplicate plot, which plodded at times, and that whut wuz tha'which worried me most, thinkin' that the udders woodn't unnerstand it, none, like, they'd'be t'inkin, whaz all this with the monkey with the blind eye gettin the medicine that the udder monkeys be getting from Caesar, like? Now where's HE fit in, becuz he's in da lab and dey're all in the shelter like, but I wuz willin' to the udders in the theatre, 'jes hol' tight, ye droogs, jes hol' on, idd'll awl be awlroigh' "

an' it wuz, becuz Caesar, the chimp who has a good sense about whoo and wha' he is, by that I mean, the drug what was passed genetically down to 'im through his mudder wuz tha'which energized his evolutionary path, brought him more cognition, into being sentien' like the humans, and 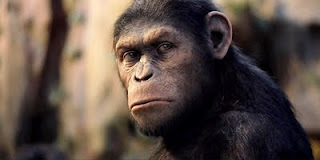 of course y'knoo tha' the humans 're gonna be portrayed at dey're worst, roigh' - except for the hero and his love and his close friends, roigh' - dat's pretty standard stuff, right there, y'knoo, and I would've liked the human hero to be a bit more anti-hero, y'knoo, and even tho' he wasn't clean or 'heroic' (I guess yoo'd callit) still, could'a been more developed . . .

but I s'pose I shouldn't complain, becuz what wuz developed wuz the backstory to the Planet of the Apes that we know well, and for tha' this movie rocked, because the same drug what made the apes smart wuz the same drug that kills off humanity, so we have the double-whammy, y'see, of the rise of the apes and the decline of the humans. Plus, they interspered the astronaut Mars mission being blown off course, which ties in the astronauts returning to Earth to find the apes in total control, so doze of us in da know can tie it all togedder, y'knoo?

'an of course if you must know, dere is a lot of action when the apes finally rebel, break out of the cages, run wild throo da streets of San Fran and across the Golden Gate Bridge toward the Redwoods and there's a lot of gunfire and apes beatin' da horses and dere's a helicopter what gets chopped in half and kingkong jumps from da bridge and brings it DOWN - man! Dat wuz a breath-sucker!

But of coorse, da best part for me, jes a guy what loves litty-ra-choor, is watching Caesar as he leads the apes to rebellion. Caesar is a leader in the best sense of da word, in that he has a clear plan, which is liberation for the apes. In ape culture, he learns that he usually has to kill to be leader, but he changes the scope by forcing the current leader to cede power by jes the SHOW of strength (basically, he shows this baboon that he COULD allow the Gorilla to kill him, but he won't) - Also, de orangutaun asks him why, and Caesar replies that apes separated are weak, but united are strong - a realization that they need them all.

Also, Caesar attempts the liberation with the intent not to kill da humans, which is noble in character, roigh' - although y'see soon the kind of concessions he has t'make. I think the writers of this story were following the example of George Orwell's Animal Farm, y'knoo, becuz I could see in the blind eye of the ugly monkey a cold-hearted killer. Caesar lets Blind-Eye kill the real evil human, but y'can see the tension already between the two - the one who wants to lead and the one who eventually wants to rule. I can see the similarity between Snowball and Napoleon from Animal Farm in dat one, roigh' dere. I can also see it in his name - "Caesar" - which references da Shakespeare play Julius Caesar, and we all knoo how DAT one ends up, roigh' - betrayal and murder, that's what!

But sadly, we don't git da chance to see da' - becuz da movie ends with the apes in da redwoods, looking over San Fran and declaring dere freedom. An'den we see the infection start to spread over da whole world, loike, and y'knoo, oh boy! it's all over but da shoutin'!