Booth 6: at the monthly meeting of the The BibliOphiliacs' Review of Books: The End of the Alphabet 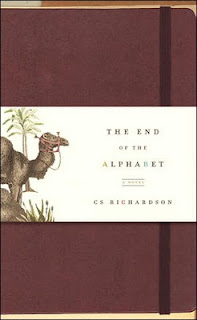 It's such a sweet sad little book, the Jane's chord being "This story is unlikely" - and it is, because no love, no marriage, is like this marriage - but we all want it to be, and that's what keeps you going through the entire book, even though no dying is ever this beautiful - but these two characters are beautiful, and we want to be like them, we want to be like Ambrose and Zipper, the beginning and the end of the alphabet, and every man, at the end, wants to die in the love of a woman like Zipper. It's incredible! I finished it on the bus and nearly broke out into tears, there, in front of all the other commuters.

plus, the writing is eloquent and beautiful -sparse, yet full of meaning, and how eloquently balanced, the dance between the two characters, how each of them remembers differently their communal history. The book does touch on some realities of marriage, such as the things that we want to say but don't, the boredom with the stories that the other tells, the disagreements about when to be with friends and when to not. So there are bits of real relationships that are interspersed in there, which is probably why the book is so touching . . . it has the reality of marriage mixed in with the fantasy.