Found this book on the bookrack at CVS pharmacy while waiting for prescription, immediately grasped by the title. The premise intrigued me, as it reflected something that has been on my mind for a long time now, especially living in a city that houses Dr Ed Young of Second Baptist Church and the brightest-toothed "pastors" - the Osteens of Lakewood Church.

And, while there are many Biblical references in this book, sadly, they are incoherently and randomly placed within the text.  Dr Mills never truly demonstrates HOW these pastors are hi-jacking Christianity.  He just keeps repeating that they are.  And, again, while I agree that they are, he says nothing about how they are.

He even throws in the quote about how these pastors say, "Corporations are people too" ... without acknowledging the source of that quote: Mitt Romney.  Who is not a pastor and is a member of the Mormon church, who, while Billy Graham went to his deathbed suddenly taking the Mormon Church off the cult list, many Baptist and Evangelical pastors still believe that the Mormon Church is a cult.  (Technically, they are)

Suffice it to say, however, this does not bode well for the book, because Mills is unfocused in his writing, and honestly, I couldn't get through half the book.

Then, there are some parts that are actually quite disturbing - certainly not doctrinal.  For example, page 10 "We do not know how long the devil had been having sex with Eve, but we do know that the devil did have sexual intercourse with her."

News to me.  So, no ... we didn't know that. How so, Dr Mills?  He only says, "We know by the nature of the conversation that took place between God, Adam and Eve (Genesis 3).

Then, page 11 "The apple on the tree is the pear on the ground."  Don't know what pear on the ground references, but I do know that the Bible never says that the forbidden fruit is an apple, and this in itself indicates that this writer has not truly studied sound doctrine.

This chapter is about the garden of Eden, and the fall, but yet it devolves into a discussion about female sexuality and prostitution and never backs up the central premise of the book.

Then, in a subsequent chapter, suddenly were thrown (p 25) this little nugget "Ishmael receives the blessing: the gift of Middle Eastern oil"

That is a modern day interpretation of scripture and is definitely not doctrinally sound.  And then Dr mills goes further and seems to imply that the reason why the Jews are so reviled by certain populations is that they have alienated others by not allowing people to be Jewish except through the birth mother, when in pre-Christian times, one could become part of Israel simply be being circumcized.

The following pages devolve even further from there, which left me sad, because now that we live in an age in which the Southern Baptist Convention and the host of Evangelicals have given up teaching the true Jesus Christ for paltry earthly power, we truly need a book describing what the title of this book says: that pastors in the modern church have sold out Jesus like money-changers in the Temple - using Christianity to make themselves stinky filthy rich.

Oh well, maybe I should write it. 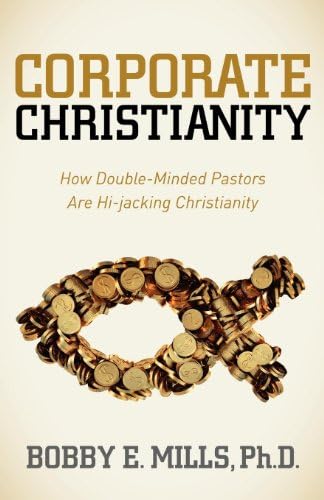