At the Counter: Some of Your Blood 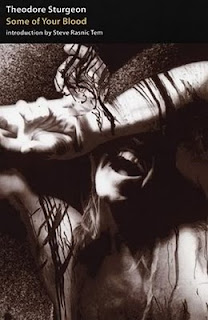 This time it's Steppenwolf who has another novel to share:

I should have honestly paid more attention to Theodore Sturgeon as a younger man, I was so involved really in Arthur C Clarke and Robert Heinlein and Andre Norton that I suppose I just missed him, but I picked up Some of Your Blood the other day, and even though you really don't know exactly what it is you're reading at the time, you just can't put it down,

I mean, this is a story within a story within a trick frame, and it's about this guy, he's in the army, hit an officer, and instead of sending him to the hoosegow they send him to a psychiatric hospital, because there's something not quite "right" about him. This story's told through letters back and forth between the shrink and his superior, and the centerpiece is "George" (that's the guy) autobiography.

But after reading the autobio, you're thinking "this is no big deal - just some kid who was raised in the back hills, drunk immigrant father, bunch of hillbilly locals, nothing for the kid to do but wander the woods, no big deal, right?

And that's where it starts to unwind - because through the letters the pshrink begins to unravel the true meaning behind this little autobio, and soon what you've read takes on a totally different connotations, and you find youself thinking "How could I have missed that when I read it the first time?" 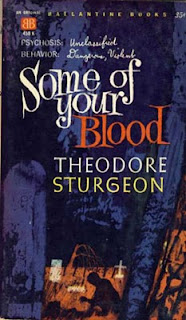 I mean - this is incredible - this is not only a book about what a vampire would REALLY be if there were such a thing as Vampires, but this is also a study in the craft of narration - I mean, this is a primer on How to Write A Narrative.

Absolutely incredible. Basically, this book is what would have happened if Jim Thompson and Mary Woolstonecraft Shelly had had a baby together: it's got the Gothic 19th Century feel, and the twisted backwoods Depression-era psychology.

Basically, it's got everything!