written and directed by Frank Darabont 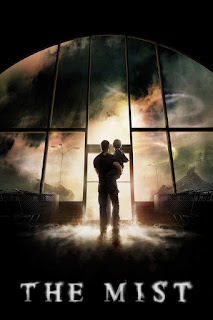 based on a novella by Stephen King
While I am in the ranks of people who most often believe that the Stephen King movies and tv series most often do not live up to his novels, I have to admit that The Mist is something that keeps coming back to my mind, even after having seen it so many years ago.   In truth, I have only seen the movie, and not read the novella, so perhaps that is why I am so impressed with the movie, but suffice it to say, it's intense...
The movie takes place mainly in a grocery store, after a mist has cut them off from the world outside, and with it, has brought giant creatures, mainly looking like monstrous insects of various body types, almost a Lovecraftian design.   But what is truly horrifying about the movie is the way that the people who are trapped together inside the grocery store interact.  Sometimes they try to help each other, and at other times, they practically feed each other to the monsters.
There is, of course, also the stereotypical "Endtimes Evangelical" who of course is portrayed as the most insane of the bunch.  That part gets a bit tiresome and stereotypical, but I've grown used to it by now.
If you do watch it, you MUST watch it to the end.  The end is the best part - and the most horrifying.  Not because of any sort of standard horror monster trope, but about the horror of the decisions that we have to make when faced with an extremely dire situation. 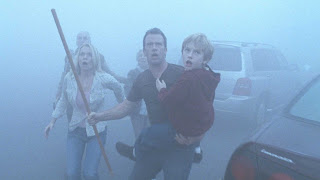