2: How could he have the right idea?  Killmonger was an American who wanted to impose colonial American culture on an African nation. 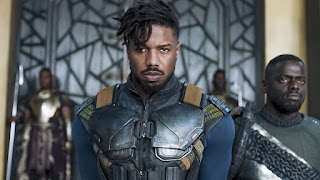 1: He was all about rejecting America and getting back to his roots.  Remember when he said that his ancestors were the ones who jumped overboard on the slave ships?

2: Yeah, but that completely ignores one fact.  Fact - if they jumped over the sides of the ships and drowned themselves, they probably did so BEFORE they could have kids.  Most of these guys had their children when they GOT to America... there wasn't no time to be havin' babies on the ship.

1: You never know - those ships were packed.  Lots of people, packed together.

2: It wasn't no romantic CRUISE, cuz!

2: Sure.  Fine.  Like, I'm gonna impregnate you, but then I'm gonna throw myself overboard and DROWN so I won't be taken to the American Colonies to be a slave.