Not even Stanley Tucci could have saved this.  It was like hearing a song so terrible that not even a Carlos Santana guitar solo could make it listenable.

OK, the breaking through to the Earth's under core to release creatures: pretty much any 1950s creature film, up through the various Godzilla movies.

The "don't speak or the creatures will kill you" has been done in "A Quiet Place" and also the other Netflix knockoff, the Bird Box.

The house they hide in looks like the house from Evil Dead. 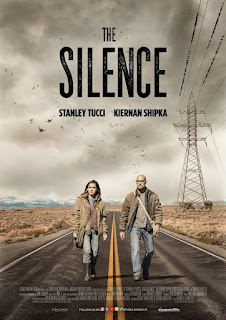 The family holing up in the house is from almost every horror movie ever made that has a cheap budget and wants that claustrophobic feel.

Eggs laid in the flesh of the victims.  Yup, check that off.  (Aliens, just for starters)

Setting off the fire alarm to screw with the creatures' echolocation system ... well, I don't remember seeing that before, but yeah, the dead bodies and the vacant stores in the deserted town:  that's from every post apocalyptic movie ever made.

Then there is the Revenant and his merry band of self-mutilators, who want the teenage daughter because she can breed.  Certainly creepy, and let's us all know that the creatures are not the only monsters here.  But still, that reeks so much of Stephen King that he himself was probably skimming through half a dozen of his own novels to find that character. 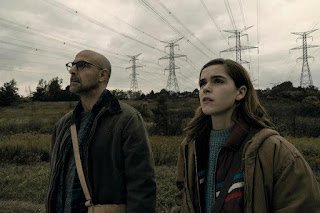 And of course, at the end, when everyone who is going to die has died, we have the whole "We're safe now but for how long?" and we end with the teenage heroine shooting a creature with a bow and arrow, which is so much like Hunger Games that I blurted out, "How did Katness Everdeen get in here?!"

Seriously, they could have just done a quick montage of every other movie that had every one of these tropes, and that possibly would have been more entertaining, because you would have seen how different scenes from different movies could have been strung together to make one barely coherent scenario.

But truly, this one is OK to pass over.

(that was an unintended pun... this being Holy Week and all)

And maybe a bit of "The Happening"