Definitely not as great as the first movie, but then the wife always has the steamies for Branden Fraser.    However, the Rock does what he always does, which is a lovable dad-figure, which was pretty fair.   Michael Caine did what we always does, which is slightly-odd sarcastic old guy.    The kid at least was trying, but I have to admit a bit of consternation as to why they chose two actors of Aztec descent to play a father and daughter from Palau.

But I realize now that my son has entered puberty.   He never once took his eyes off of Venessa Hudgens 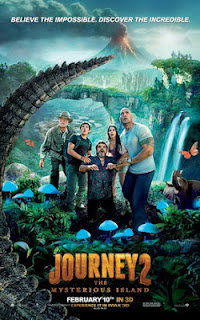 Actually, for me, the only interesting part was the attempt to tie Verne's Mysterious Island to Swift's Gulliver's Travels to Stevenson's Treasure Island.   Basically, making them writing about the same mysterious island.   But then, that only took up five minutes of film time.    Still, it was the most intriguing five minutes of the movie.
Posted by zen and tao at 6:59 AM