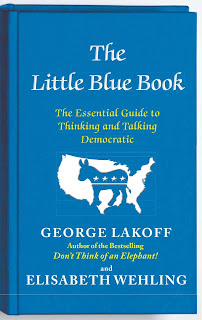 p.20 The understanding that private success always depends on public support leads to progressive taxation: the more you earn from public support, the greater your responsibility for its maintenance.

p48 Extreme conservative discourse is taken as neutral in the absence of a progressive alternative, but it is anything but neutral.  It is dangerous…

p. 81 “Government has a moral duty to protect and empower its people”

p. 86 The Founding Fathers were right: public education is necessary for a democracy as well as a vibrant economy.

p. 107 Good soil feeds us forever.  In the long run, a farmer’s crops are worth more than the oil underneath.  Don’t drill.

George Lakoff, a cognitive scientist, studies how the brain works, and in this and other works and lectures he explains how the “Right” uses the mechanics of words much more adroitly than the Liberals or Progressives in getting their message across.  In fact, they are so good at this that often their message is conveyed by the Left because two things: 1) the way the Left feels compelled to explain and defend against all “Right” attacks, no matter how insane, and 2) by using and repeating the language of conservatives, thereby ingraining the ideas into everyone’s minds even further.

While I disagree with the facility by which Lakoff and Wehling in this book relate the opposing political viewpoints to broad generalities about the idea of the “family,” these authors are very compelling in their directive that the Left must understand what it is that they believe and communicate that message to the best of their ability.   Don’t use the language of the Right.  Don’t try to fight them on their own terms.  Explain why progressive ideas are better for everybody.   This book gives great examples.  I would give some here, but then that would just include posting large swaths of the text.   Instead, I encourage you to go read the book and discover them for yourself.
Posted by zen and tao at 9:46 AM